I love this recipe, especially once the nights start getting colder. It’s a very simple dish, yet truly delicious and so very fulfilling. 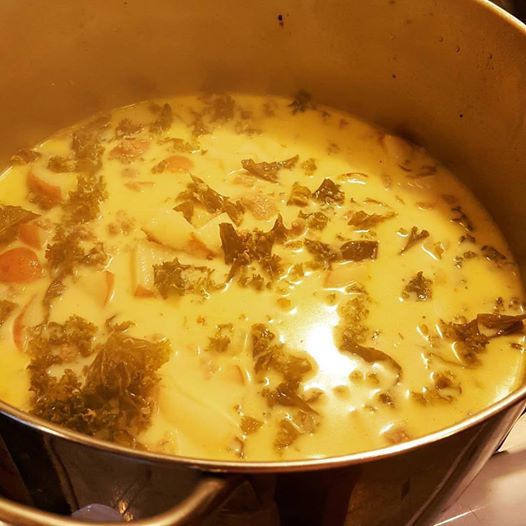 I don’t really even have a “recipe” at this point.

I like to cube up a good number of red potatoes, like 8-10 small ones. I start these boiling while I do the rest of the prep. I don’t like to cook them entirely this way but it’s good to get them started toward softening. And, even more importantly, this pulls off a lot of the heavy starch that can make the final soup kinda grainy and cloudy.

While the potatoes are cooking, I chop up a large-ish yellow/sweet onion into a pretty fine dice. I saute the onion in a little olive oil, seasoning with a little salt and pepper, until the onions start to turn translucent.

Once the onions are getting soft, I push them to the side of the pot and brown 1 lb. of sausage. Preferably you’ve got some spicy sausage that will lend it’s kick to the final dish. If not, feel free to spice it up while it’s browning. I had some local pastured sausage this time that is delicious but doesn’t have much fat or spice. So I added a good dash each of salt, pepper, garlic, oregano and red pepper flake. Keep stirring the onions separately and keep breaking up the sausage until it’s mostly cooked, almost no pink. I like to leave some bigger chunks of sausage. Just make sure it’s cooked through.

This is a good time to check the potatoes. You don’t want them overcooked. They are going to cook more in the soup, so as soon as they are mostly softened be sure to drain them and reserve 2-3 cups of that starchy boiling liquid.

Once the sausage is browned, add your kale to the pot and stir together with the sausage and onions. If your sausage hasn’t given off much fat, you can add a little more olive oil. The kale needs a little oil to wilt properly. Cook the mixture until your kale is wilted and really starting to soften. In my case, I had several cups of leftover kale I had cooked with onion and olive oil the night before, so mine was already cooked down and just needed to warm up in the mix. This is a *wonderful* way to use up kale leftovers! In fact, the more cooked your kale is before it goes in, the better. I’ve never done it but it wouldn’t hurt to maybe microwave fresh kale for a bit before adding to the soup.

Once the sausage-onion-kale mix is well combined and the kale softened, add your potatoes to the pot. Then add 2-3 cups chicken stock, 1 cup of cream, 2-3 cups of milk. Give it a good stir, then top it off with as much of the starch water as you need to get the volume you want. The liquid part of the soup should completely cover the solid bits at this point.

Once everything is in the pot, just stir, bring back to almost boiling, then simmer as long as you want. You don’t want it to actually boil with the cream and milk in there, so watch it closely and drop the heat before you get bubbles. I like to serve the soup before the potatoes are completely fall-apart, but it’s more important to make sure your kale is soft.

The good news is this soup gets more creamy and yummy each time you re-heat it. It’s a wonderful addition to your Fall menu planning.

Unauthorized use and/or duplication of this material without express and written permission from this site’s author and/or owner is strictly prohibited. Excerpts and links may be used, provided that full and clear credit is given to Troy Maynard and VeryVocalViking.com with appropriate and specific direction to the original content.